1. Introduction
Optical advanced modulation formats combined with coherent reception provide a reduced symbol rate and spectral width along with digital compensation of linear impairments for fiber optic transmission. The combination allows carriers to upgrade 10-Gb/s networks to 100-Gb/s networks with minimal change to the fiber plant. Coherent technology has been mainly deployed in long-haul networks, and it is now starting to be deployed in metro networks. The main impediments have been the cost and footprint of the transceivers, which consist of a tunable laser, an advanced format modulator, a coherent receiver front-end, and a digital-signal processor. Indeed, the dominant cost of optical networks today is in the transceivers.

One way to tackle cost and footprint is optical and electronic integration. Optical integration reduces cost by minimizing assembly touch points, minimizing mechanical adjustments, minimizing test apparatuses, and minimizing the amount of material required. Choices for optical integration platforms include Si, InP, GaAs, silica, and polymer. Si photonics (SiPh) is attractive because of the following: 1) all the waveguides are formed from the original crystal boule instead of epitaxy, except for the Ge photodetectors. This results in nearly zero defects. 2) Si has an ideal oxide, silica, which is easily formed and has excellent properties including very low optical loss, high electrical isolation, large refractive index contrast, hermetic sealing, and wafer bondability–leading to silicon-on-insulator (SOI) technology 3) Because of SOI technology, Si waveguides enjoy high index contrast both horizontally and vertically, resulting in extremely high confinement and hence tight bends for compactness. 4) SiPh modulators use carrier movement rather than band-edge effects, making them less sensitive to temperature [1]. 5) Si is a very low cost and strong material allowing for large 300-mm-diameter wafers.

SiPh is often considered mainly for short-reach interconnects [2] because of perceived performance limitations. However, SiPh may be even better suited for coherent transceivers than for on-off-keying short-reach transceivers. This is because 1) SiPh can construct an optical circuit with tens of elements with high yield, 2) the polarization de/multiplexing of coherent alleviates the difficult-to-meet requirement for polarization-independent integrated optics in a small geometry, 3) SiPh’s high index contrast is well-suited for splitting and rotating optical polarization, and 4) the main electro-optic imperfections in SiPh can be compensated in the digital signal processor (DSP) of a coherent transceiver.


The PIC operates as follows: a cw laser enters the “L” port. The power is split, half going to the receiver as a local oscillator and half to the transmitter. The received signal enters the “R” port and is polarization split. It is interfered with the local oscillator in two 90 hybrids and goes to eight high-speed Ge photodiodes. There is a tap and monitor Ge photodiode for the receiver input. On the transmitter side, there are two in-phase (I) / quadrature (Q) travelingwave Mach-Zehnder modulators (MZMs). There are taps and monitor Ge photodiodes for feedback control of the modulators. The two I/Q modulators are combined in a polarization combiner and exit into the transmit fiber via the “T” port. The receiver contains VOAs for optical power control. The PIC does not require any temperature control, and thus there are no thermoelectric coolers or heaters in the package.

The PIC is optimized for high yield and low-cost assembly. All of the elements in the PIC are designed to be as robust as possible to process variations. The PIC is tested electrically and optically on wafer, before dicing, using surface-emitting couplers in the PIC and a commercial wafer prober. The assembly process is a standard microwave assembly–the PIC, TIAs, and drivers are placed in the package and wire bonded. By integrating as much as possible into a single chip, including both the modulators and receiver, the assembly piece-parts are minimized. All the optical input/output is handled by a single 3-fiber assembly, attached with UV-curable adhesive.

3. Results
The PIC package was placed in a socket, as shown in Fig. 2(a), and the transmitter was connected to a multiplexer with four 30-Gb/s outputs and the receiver to a real-time DSP ASIC with four 30-Gb/s inputs all via GPPO cables. There was a +13-dBm tunable laser connected to the “L” port. The PIC has control loops in an FPGA using feedback from the on-chip monitor photodiodes that automatically adjust the MZM phases to produce QPSK.

Fig. 2. (a) experimental setup of PIC, (b) eye diagram of 120 Gb/s DP-QPSK directly from the PIC,
and (c) real-time-measured constellations using optical loop back from and to the PIC.

The measured real-time pre-forward-error-correction (FEC) bit-error rate (BER) vs. received optical signal-to-noise ratio (OSNR) is show in Fig. 3 at five wavelengths across the C-band, from 191.8 to 195.9 THz, at three case temperatures, and at four transmission distances. OTU-frames with a 215 1 PRBS load were used. Shown for comparison is the performance using discrete optics, i.e., a LiNbO3 modulator, gold-box drivers, and a hybrid receiver. As mentioned previously, SiPh has very low temperature sensitivity; except for wavelength filters, which we do not use in our PIC; so no temperature control is required. The change in OSNR performance from 10C to 75C is very small. Also shown is up to 3000 km of transmission. The lack of penalty from transmission indicates that the chirp of SiPh modulators is likely negligible. We verified the lack of chirp with simulations of detailed models of the SiPh modulators. 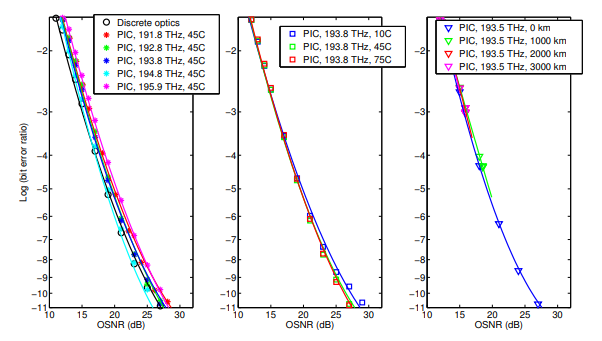 
4. Conclusion
We demonstrated a single-chip 100-Gb/s coherent transceiver in silicon photonics which contains all the required optics except the laser. Consistency of performance over wavelength and temperature supports that 100-Gb/s SiPh is ready for commercialization, particularly in applications where low cost and small factor are important.