In celebration of Acacia’s 10-year anniversary this year, we thought it was the perfect opportunity to highlight some of the employees that have played a valuable role in Acacia’s success. Jim Duda, an ASIC architect, is a perfect example. Jim has been with Acacia since 2011, only two years after the company was founded. He was employee #45 and you can imagine that life at Acacia was much different than it is today with our current 400 employees. 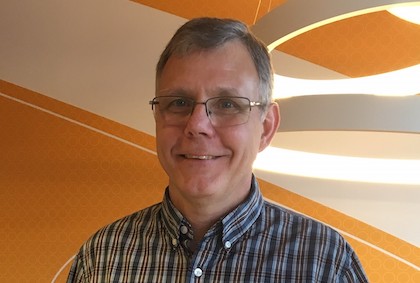 The Early Days
When Jim joined Acacia, the company had just started developing its second DSP ASIC chip and was in a small office on the 2nd Floor of the current Maynard building. Prior to joining Acacia, Jim was already at a job he liked a lot, but a friend who worked at Acacia convinced him to at least take an interview. And he was glad he did. “When I met with the ASIC team, I was instantly impressed by the people and the technology,” said Jim. And surprisingly, at the time there wasn’t even a spot for him so he was hired for something outside of his core competency. The team at Acacia then taught him what he needed to know to be successful. Jim said he felt a little bit like a grease monkey in those early days working with all these amazingly brilliant PhDs. However, the team was a dream team. “There was not one ego and every single one of us thrived on making each other successful,” he said.

The early days were fast paced. Jim was part of a small team so they all wore multiple hats and were constantly learning new things. “There was so much energy, and while we felt like we were under water most days, we all had faith in each other that we would all execute our parts,” said Jim. The management and PhDs were also there to help along the way. They regularly gave lectures around the technology, always trying to help employees learn more and be better at their jobs. “It was, and still is, a great place to work,” he added.

Chip Day
Looking back at his 8 years at Acacia, one of the things Jim has enjoyed the most has been Chip Day. “Chip day is the ASIC team’s Superbowl” said Jim. This is when the ASIC that Jim’s team tapes out comes back into the office. Jim says his wife even puts Chip Day on the calendar because she knows what an exciting event it is for Jim and his co-workers.

“The energy when that chip comes back is just incredible,” said Jim. “Following Chip Day, everyone works together to bring the ASIC up and running, and the adrenaline flowing throughout the company is amazing.” Jim says these chip milestones have been especially memorable at Acacia because all their chips have worked first time. “This is clearly the result of the engineering talent at Acacia, the way our whole company comes together and supports one another, and the policies and procedures we have developed to make sure everything goes as planned.”

When asked how he thinks Acacia’s chips compare to the competition, Jim was quick to point out how Acacia’s products have always had great performance and very low power. “I have always been proud of that,” he said. “We have developed a unique process that enables us to consistently deliver high-quality products with increasingly lower power.”

How Things Have Changed
When asked what things have changed in 8 years, Jim says it’s the availability of tools and resources. “We have been fortunate to grow at a steady pace, allowing us to invest in our infrastructure so that we can be more successful and more aggressive,” he said. However, while Jim says that they now have a lot more people and more expensive tools, they still have the same hard-working attitude and winning culture that was so apparent when he was just employee #45. They also still have one common priority: they know that in order for Acacia to succeed, its customers have to succeed first. “Whether you look back 8 years or back one day, we all would do anything to help our customers succeed,” he said.

Jim says he loves working in the Maynard area with all the shops and restaurants and he also really values working for such a great company. “Acacia is so much more than just a job,” said Jim. A perfect example is the personal trainer Acacia hired that runs exercise classes throughout the week. “This helps reduce stress tremendously,” he said. “Acacia really understands the mind/body connection and as a result, we all just love what we do. At the end of my day, I feel as though I just walked through the door, yet it’s already time to go home.”

When asked what wish he would send to Acacia for its 10-year anniversary, Jim reflected on the company’s history. “When we first started, we were huge innovators in our marketplace and we really disrupted how coherent technology would work. My wish is that Acacia expands our scope so we can become a disruptor in other markets as well.” Jim says he believes that could happen because Acacia still has the great people and technology it did in the early days.

Jim also had another wish for Acacia based on his own personal life. As a father of two girls and two granddaughters, he hopes to see Acacia and other companies in the telecommunications space become more gender diversified. Interestingly, a few days after this interview, Acacia announced that it had appointed Laurinda Pang to its Board of Directors. Clearly, Acacia is on its way to making Jim’s wish come true and we are proud to be a driving force for gender diversity in the optical communications industry.

Jim says that even after 8 years he still loves coming to work every day. “Not many people can look back 8 or 9 years and still absolutely love their job,” says Jim. “I have been at a lot of start-ups and Acacia ranks at the top of the list. And now, as a growing public company, I believe we have a plan, we are executing, and we are all enjoying the ride along the way.”