All it takes is a blink of an eye and a push of a button to send an email from the US to Europe, or access a website anywhere around the world.  It’s so easy we don’t even think about it, but the reality is it’s actually quite complicated. In fact, nearly 750,000 miles of submarine cables have been laid in the ocean to enable this type of inter-continental communication. 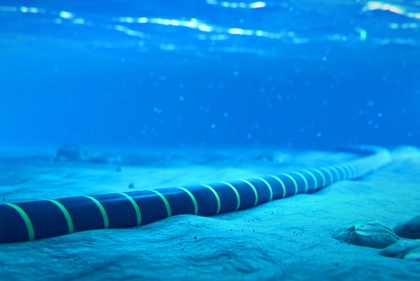 Submarine cable networks are critical pieces to the global flow of network data. It is estimated that these cables carry 99 percent of all international communications traffic such as voice, data and video.  While submarine cables were traditionally owned by telecom carriers, it’s been the content providers themselves, such as Google, Facebook, Microsoft and Amazon that have started investing in the build-out of new undersea cables in recent years.  They are doing this to ensure they can meet the explosive demand for more internet bandwidth which is being driven by their services such as cloud and streaming media. Key to meeting this demand is the use of fiber optics technology and advanced coherent transmission systems in both new and older cables.

Fiber Optic Cables
The main advantage to fiber optic cables under the sea is that they allow large amounts of data to be transmitted very fast.  For example, if you want to stream a video, that video is converted to light so that it can be transported across a fiber optic cable.  Before it reaches its destination, it gets converted back to video.  While that process sounds simple, the technology behind it is amazingly complex and took years of development from optical component vendors, network equipment manufacturers, telecommunications carriers, and many others.

A good example of a fiber optic cable is MAREA, a 4,000 mile cable system built by Microsoft, Facebook and Telxius that crosses the Atlantic Ocean, connecting the United States to southern Europe. Completed in 2017, this massive 10-million pound cable is located 17,000 feet under sea in some places, and runs between Virginia Beach, Virginia and Bilbao, Spain. The MAREA cable features an open design and advanced coherent transmission system that allows it to evolve over time to enable the adoption of new technologies. Last December, the first 400G single carrier DWDM transmission was achieved on the 6,600 km Marea submarine cable.  This was significant because it demonstrated that improvements in capacity and spectral efficiency can enable increased utilization of deployed fiber and improved network capacity. To put into perspective how significant 400G transmission was on a submarine cable, think about the process of downloading all 8 seasons of Game of Thrones in high-definition. Ten years ago using an optical cable at 10G, it would take about an entire day.  However, on a fiber optic cable running 400G, it would only take seconds to download. Higher speed is one of the reasons content service providers are so motivated to invest in the deployment of fiber optic cables in the ocean.

Another example of a content provider getting into the submarine cable business is Google, which has funded 13 submarine cables in the last ten years. Recently, Google completed a 6,214 mile subsea cable linking the coast of California to Chile. Named Curie, after the renowned Scientist Marie Curie, this cable was the first new cable to land in Chile in almost 20 years and is now the largest single data pipe connecting the country.  The growth of the cloud and internet services is driving the need for increased subsea network capacity and the content providers are setting themselves up for the future by investing in high-speed fiber links.

Future Undersea Developments
Many new fiber optic submarine cables are being installed to connect other parts of the world to the global internet backbone.  Every country wants to participate in the Internet revolution and with exciting new applications emerging such as 5G, the Internet of Things, machine learning, and self-driving cars, the need for higher bandwidth is growing.  Expanding subsea communications has the potential to connect our world like it’s never been connected before.

This is one of the hot topics at PTC’s Annual Conference, January 19-22, 2020 at the Hilton Hawaiian Village® Waikiki Beach Resort in Honolulu, HI.  Acacia will be participating in this event which is a strategic springboard for the global communications industry providing attendees with a three-day platform to focus on planning, networking, and discovering what lies ahead.  If you’re attending, contact us and we’ll be in touch to schedule a meeting.