Optical trends have been driving an inflection point in the telecommunication industry that we believe will have a significant impact on coherent development going forward. In this blog, I’ll first address the trends and then explain how specific steps in coherent technology can be organized into classifications based on baud rates. These are grouped based on technological capabilities, industry standardization and common industry investments.

Network operators need to efficiently scale their networks to keep up with growing user bandwidth demands.  To meet this need, it is going to be increasingly important to develop next-generation solutions based on scalable technologies that are aligned with industry trends.

Coherent Moving to Shorter Reaches
As the industry moves to higher data rates, coherent is being adopted in shorter reach interfaces, which is increasing the share of coherent ports that are deployed in pluggable form factors. For example, the 400ZR specification targeted 80-120km reaches, and subsequently the OIF is now working on a project to define an 800LR that targets 10km and below. As this trend continues, it is likely that we’ll also see coherent move into the data center in future generations. These shorter reach interfaces tend to be higher volume than traditional transport applications, and as we look at this transition, it becomes more important to have interoperability and pluggable form factors that can plug directly into router interfaces.

Standardization is Key
The industry has been steadily moving to more standardization. 400G was a significant step forward and today we have a variety of standardized interfaces including 400ZR/ZR+ and Open ROADM – all of which are growing. These standardized interfaces are displacing both proprietary solutions in more traditional transport applications as well as direct detect solutions in shorter reach interfaces. Over time, most optical industry analysts agree that these standardized pluggable interfaces are expected to contribute a larger and larger portion of all the coherent ports in the industry.  Multi-haul solutions that address multiple applications will still be needed, but it will be important to align these multi-haul investments with standards.

Approaching the Shannon Limit
From a development perspective, incremental improvements in spectral efficiency are being made as we approach the Shannon Limit, but we need to find ways to grow network bandwidth more efficiently over time. In the past, we were able to scale the amount of data being transmitted over a single set of optics, while also increasing capacity on the fiber. Today, we are scaling as we increase baud rate, but the amount of data on the fiber is growing more incrementally. This is changing the way we develop products for the future and increasing baud rate cost-effectively is critical moving forward.

These three trends point to high-volume standardized solutions having a greater influence on next generation industry investment.

The below figure illustrates how coherent technology has evolved in response to growing bandwidth demands. Different baud rate classes are grouped based on technological capabilities, industry standardization (such as OIF, IEEE, Open ROADM, OpenZR+ MSA, CableLabs, ITU, IEEE) and common industry investments. Throughout this evolution, it has been critical that each successive class support similar reaches to the previous class. 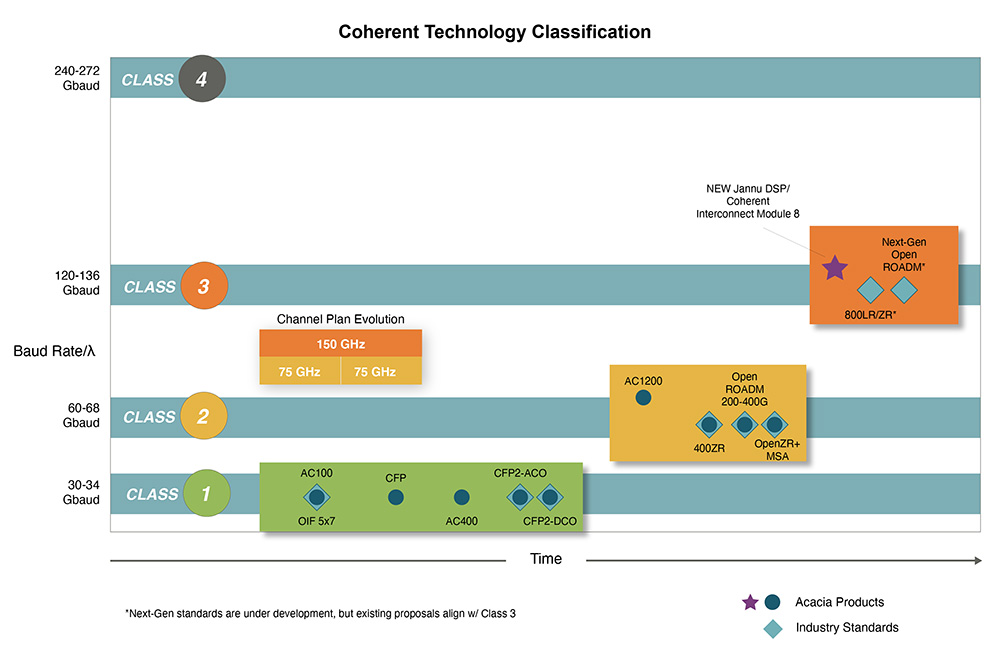 Baud rate has doubled for each coherent technology class.

Class 1
There was a long period during the early days of coherent technology development with multiple investment nodes. At 30-34 Gbaud, there were 100G and 200G products and the industry made a significant investment at this stage. In this generation, there was widespread standardization of components such as modulators and receivers. However, standardized optical interfaces sacrificed significant performance compared to proprietary implementations, so they were not widely adopted.

Class 2
This is where the industry is today, and it is during this stage that standardized optical interfaces are being widely deployed for the first time. The first Class 2 products were proprietary interfaces supporting multi-haul applications in embedded module form factors. Later, 400G faceplate pluggables, driven by standardization efforts that drove heavy investments into products centered around 16QAM, 60+Gbaud per 75GHz channel transmission were introduced with strong industry adoption. When we migrated to Class 2, we doubled the baud rate and enabled an increase in the data rate.

Class 3
These products once again represent a doubling of baud rate compared to the class before it, with products migrating to 120-136 Gbaud. This approach of doubling baud rate is utilized in standards because it allows for this doubling of data rate using the same modulation format as the previous class. 4 bits/symbol was chosen for 400G standards because it supports a wide range of applications. When scaling from 400G to 800G, doubling the baud rate is the logical path forward.

Class 4
These products will continue the trend we saw in the earlier classes where the model is to increase baud rate but take additional steps to cover all applications. Like earlier trends, we expect the baud rate to also double from Class 3 to Class 4 products, while utilizing the same modulation order.

“These classifications basically mirror industry investment cycles, which is absolutely the right way to align coherent technology development around,” said Alan Weckel, Founder and Technology Analyst at 650 Group. “At the end of the day, operators need solutions to be cost effective and the best way to do that is to leverage the investment across all the various applications and benefit from higher volume production and scale. Increasingly coherent ports are moving to pluggable form factors and as we approach the Shannon Limit, further improvement in cost will come from going to higher baud rates, but in cost effective way.”

Acacia’s Class 3 Solution
Acacia’s recently announced Coherent Interconnect Module 8 (CIM 8)  is a Class 3 solution that can address transmission of multiple 400GbE client interfaces over virtually any network application, delivering 1.2T per carrier capacity for high-capacity DCI interfaces and 800G per carrier capacity over most optical links using 4 bits/symbol (~16QAM) modulation. This product supports 150GHz channels with double the capacity per carrier and longer reach than that of the previous class, providing a simple, scalable path that is compatible with the previous network architecture generation.

The Future of Coherent Development

As the coherent technology classifications chart highlights above, the industry has undergone several large investment phases.  This has been good for the industry because it allowed vendors to have a significant ROI, worked well with network operator upgrade cycles, and avoided many small iterative steps in between. However, moving forward it is going to be important to align with these industry investments. As a result, we need to think about how to develop solutions that scale to high volume in a power-efficient and cost-effective way. Silicon photonic based coherent interfaces have proven to be successful in meeting these challenges generation after generation and we believe this technology can continue to help effectively meet bandwidth demands of the future.