It’s no secret that silicon photonics has driven significant reductions in the power, size and cost of optical modules. If you look around the telecom industry today, you will see that an increasing number of optics vendors are leveraging this technology for their pluggable coherent solutions. However, this was not always the case. If you looked back 9 years ago, you would see that many companies were challenging whether silicon photonics was even going to work at 100G coherent optics.

Acacia was a pioneer of silicon photonics in 2012 when it was the first coherent module vendor to envision silicon as the platform for the integration of multiple discreet photonic functions while increasing the density and reducing cost of optical interconnect products. According to Gazettabyte, Acacia’s choice to back silicon photonics for coherent optics was an “industry trailblazing decision.”

Today, Acacia’s solutions leveraging silicon photonics are available in a wide range of coherent optical interfaces, from edge and access to subsea applications, to enable high-speed transmission and excellent performance.

The Power of Silicon Photonics

Using silicon as an optical medium and leveraging CMOS fabrication processing technology, silicon photonics allows tighter monolithic integration of many optical functions within a single device. While traditional optics systems used many discrete pieces, silicon photonics allows all those pieces to fit onto a single silicon chip.  This tight integration is what has allowed component vendors to continually drive reductions in the cost and size of optical solutions. For network equipment manufacturer customers, using the silicon photonics chip means they can design more ports per linecard, increasing the capacity of their system.

Below are a few reasons that silicon photonics has been so successful and has emerged as a key technology for existing and future optics solutions.

In component stacking, electrical impairments are reduced due to very short electrical connections between key RF components, creating a robust signal path for extremely high frequency/baud rate operation. In this stacked design, the gold-box packaging is eliminated, the DSP, and PIC are tightly co-packaged on the same substrate, and the high-speed modulator driver and TIA components are stacked on the PIC.  Stacked design has a higher (better) frequency response than the traditional gold-box design. Advanced stacking designs can further reduce interconnect impairments, resulting in even higher frequency response. 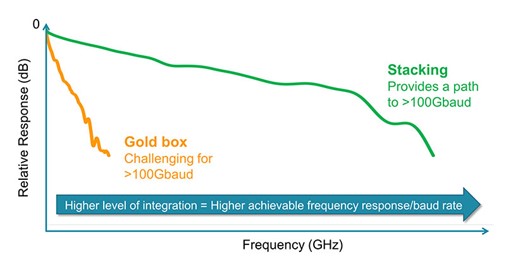 Because of its ability to drive performance and volume manufacturability, silicon photonics has the potential to unlock new architectures needed to keep up with rising demand.  An example is pluggable coherent transceivers that can be plugged directly into switches and routers offering the same density for both coherent DWDM and client optics in the same chassis.  It can also drive future generations of optics design that push the envelope on performance, cost, complexity, and size.

The industry is now turning to silicon to produce a wide variety of devices, using mainstream silicon manufacturing process technologies that have matured over many years.  As optical transceivers need to support higher data-rate, driven by the demand for higher speed networks that can handle the rising bandwidth demand, we believe silicon photonics will once again allow the capacity to grow without significantly increasing the size and cost of the devices needed for the future. For this reason and the benefits discussed above, Acacia plans to use silicon photonics in all coherent applications going forward to help customers stay ahead of the curve.